Veteran taxicab drivers are being treated unfairly by the Metropolitan Washington Airports Authority (MWAA), drivers can't maneuver around Uber drivers' blockade during rush hour--and passengers in a cab end up racking up a fare solely in wait time--Uber and Lyft block cabs in! Taxi drivers cannot even get to their post due to Transportation Network Companies (TNCs) such as Uber and Lyft causing the rush hour traffic.

After fighting to be heard for more than a year, we organized 110+ drivers from the National Airport Taxi Drivers Association (NATDA) and demanded the opportunity to speak to the board.

The NATDA has sent multiple letters to the MWAA and they have not remedied the situation.

A recent Washington Post article states that Jack Potter, CEO of the MWAA, is one of the highest-paid airport executives in the country and that his contract is not public. Similarly, taxi drivers are concerned about alleged agreements between Potter and Uber/Lyft that have not been made public.

Three months ago, the 1635 taxi drivers the NATDA represents worked 60 hours a week to make a living. Now with the MWAA's vile treatment of taxis, those 1635 drivers are making 20-40% less, and in many cases working an extra day.

Taxi workers with the NATDA, demand MWAA to respect drivers and stop blocking and displacing them. Further, we call for an end to preferential treatment to Uber/Lyft -- unregulated vehicles that pose safety and security threats to drivers, staff, and the public.

NATDA calls on the MWAA to respect the livelihood of the drivers that have served the airport for decades and prove their commitment to giving airport employees access to a living wage.

Over the course of our meeting on the 27th as well as in the weeks beforehand, members of the Airports Authority have told taxi workers that Uber and Lyft could not be relocated to the departure level, could not be relocated to the north end of the terminal, could not have their passengers shuttled to either the Uber/Lyft lot in Crystal City or to the Long Term parking lot behind the airport.

Given that all of our suggestions have been rejected out of hand, with no feasibility study, there does not seem to be a basis for negotiation--the MWAA effectively is silencing Taxi workers.

Respect our taxi drivers. Complain to the MWAA. 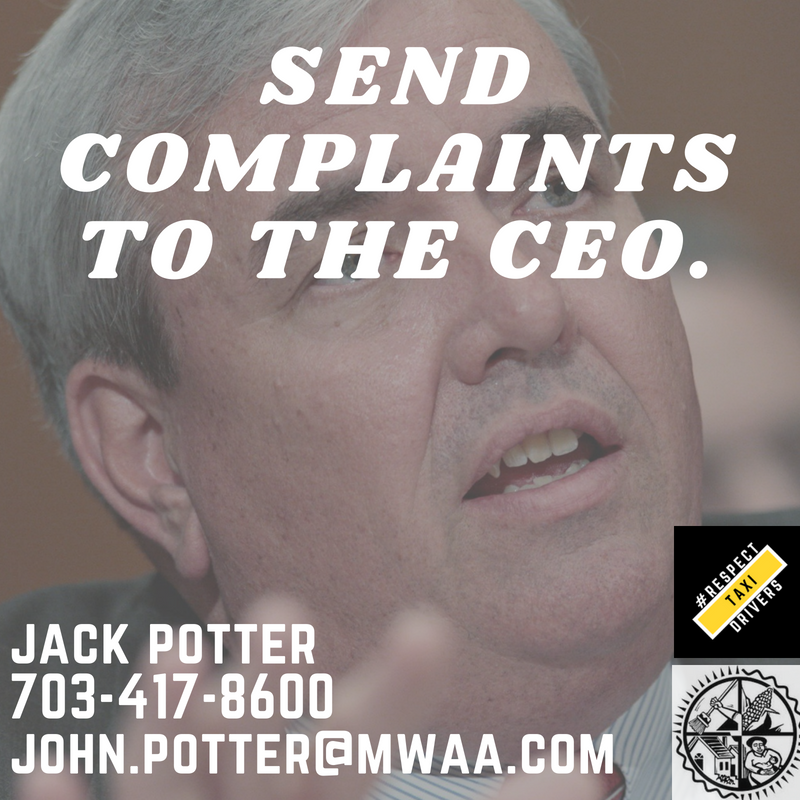