TWU conducts public policy and issue campaigns, low-wage worker and community organizing, education and leadership development, and non-partisan electoral organizing, all of which are geared to our overall mission of building regional power in Northern Virginia, and a broad, political-economic justice movement centered in the leadership of working-class women and communities of color. 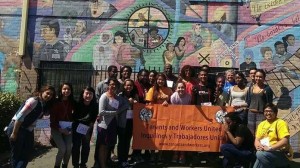 Parent and Youth Organizing: Trains parents and students to advocate for themselves and their families in the public school system. In 2009, we signed a memorandum of understanding with Alexandria City Public Schools to work together to close the achievement gap. Today, we are working to implement “restorative justice” in our schools. Restorative Justice is a system of discipline that works to address the core problems that lead to conflict or problematic behavior.

Taxi Organizing: Taxi drivers are organizing in Alexandria City, Arlington County, and Fairfax County. In these communities ranking in the top ten per-capita income communities in the nation, drivers are subject to capricious owners who take advantage of outmoded regulations to limit driver freedom, independence, and earnings. On average, drivers earn an annual income of $32,000 working 65+ hour weeks without employment benefits and without job security. They are essentially chained to the taxi company because the law allows company owners to engage in ad hoc firings, raise stand dues at whim and fear tactics. Until the arrival of Uber X, taxi companies discouraged competition and effectively ran monopolies in their respective jurisdictions. In addition to the employment constraints, drivers endure other abuses at their workplaces. Their racial identities and status as immigrants are routinely cited against them, with Muslim and Middle Eastern drivers most frequently subjected to xenophobia by employers, riders, and some elected officials.

Alexandria Yellow Cab Committee: Yellow Cab, the largest cab company operating in Alexandria City has offered to sell the company to its 280+ employees. Currently in the final stages of negotiation, this purchase will mark a victory in ten years of ongoing organizing and awareness within the cab driver community and the success seen by Alexandria Union Cab, Alexandria’s first cooperative established in 2007. Driver’s stand to save $128 in weekly stand dues (or more than $6000 per year) and a share of the $2 million profit that Yellow Cab currently yields. In addition, owners would purchase and implement the latest dispatch technology so that the company remains competitive with unregulated car services, like Uber X, that are growing in popularity. 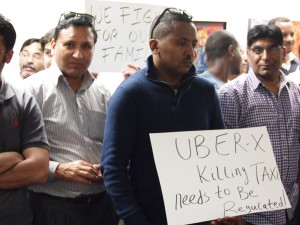 Arlington United Taxi Operators: In Arlington County, drivers affiliated with TWU are taking on Uber and the local government. More than 200 drivers have been active in efforts over the last four years to win a Bill of Rights to guarantee drivers due process. The newly re-constituted Arlington United Taxi Operators (AUTO) organization is also looking to level the playing field with regard to car services such as Uber and Lyft which have entered the market unregulated and backed by millions of dollars in venture capital.